“SaskTel’s strategic priorities place their customers at the centre of everything they do with a goal of making it easier for customers to do business with the company and for employees to serve customers,” said Don Morgan, Minister Responsible for SaskTel. “Throughout the year, SaskTel invested approximately $263 million in capital improvements across the province to continue to prepare its networks for future demand and to deliver a quality user experience for the people of Saskatchewan.”

“As we enter a new decade, we find ourselves on the cusp of monumental change in our industry as digital, web-based, and emerging technologies continue to reshape the way we operate and interact with our customers, vendors, and other partners,” said Doug Burnett, SaskTel President and CEO. “We recognize that we must evolve our business to support customers’ shifting expectations and to continue providing exceptional service in a digital world. Digital transformation continues to be the main driver reshaping customer and employee experiences across our business.”

SaskTel’s financial measures are focused on creating shareholder value, generating revenue and earnings, and effectively leveraging its capital investments. These measures provide important insight into its current financial performance and overall progress enhancing its long-term financial stability. SaskTel’s Return on Equity (ROE) is below the target of 11.1%, due to the recognition of an impairment loss in the fourth quarter of fiscal 2019/20 and its resulting impact on net income. Excluding the impairment loss that was primarily related to impacts of COVID-19, ROE would have been on target at 11.1%.

SaskTel paid dividends of $107.2 million to Crown Investment Corporation during the fiscal year ending March 31, 2020, a decrease of $9.1 million from the previous year. During the last five fiscal years, SaskTel paid a total of $373.4 million in dividends while maintaining a debt ratio within industry standards. 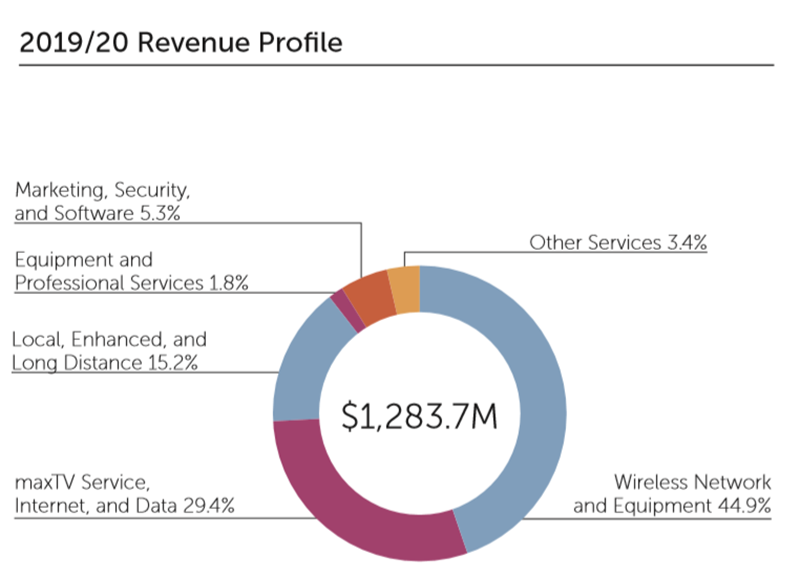 Legacy revenue continues to decline but is offset by revenue growth in fixed and wireless broadband. SaskTel offers its customers increasing internet bandwidth through improvements to its network infrastructure, including Fibre to the Premises (FTTP), fusion, and expansions of DSL internet and wireless broadband to rural communities. SaskTel continues to expand its managed and emerging services portfolio by offering innovative ICT solutions, including managed cloud and Tier III Data Centre services and remote network monitoring services to its customers.

SaskTel’s mission to provide an exceptional customer experience begins with its North Star – broadband. SaskTel invested $262.9 million in capital to improve the coverage, capacity, reliability, and speed of its networks. 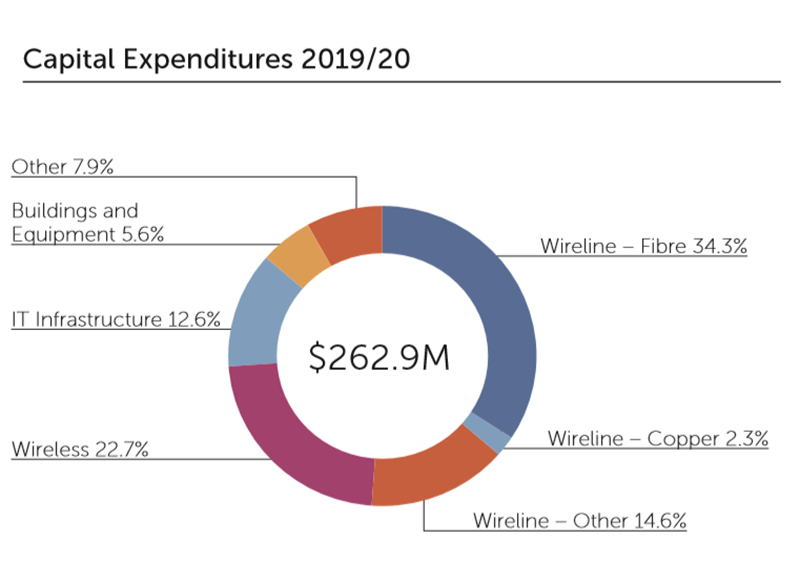 Of the $262.9 million, $228.4 million (2018/19 – $239.3 million) was spent on property, plant and equipment, including Fibre to the Premises (FTTP), wireless networks (LTE and Wi-Fi), Access Demand, and other network improvements while the remaining $34.5 million (2018/19 – $28.9 million) was spent on intangible assets such as customer self-serve systems, accounting reporting systems, and wireless spectrum.

As of March 31, 2020, SaskTel boasts a wireline network that reaches nearly twice as many communities as its next closest competitor, offering internet services in a total of 459 communities, with 319 communities having speeds up to 50 Mbps or faster.

SaskTel continued to expand its fibre service to new neighbourhoods, making it available to over 16,000 more homes and exceeding the target for homes passed. SaskTel also connected nearly 16,000 customers to infiNET service, exceeding the targeted connections by 57%.

SaskTel is proud to remain an integral part of its community, and through long-standing partnerships is committed to making a positive difference in the lives of Saskatchewan people. Giving back to the communities where its employees live and work is part of the culture of SaskTel.

Throughout 2019/20, SaskTel contributed $2,850,827 to 957 non-profit and charitable organizations, community associations, venues, events, and partnerships in more than 233 communities. The SaskTel Pioneers also contributed $206,273 in financial donations, $983,700 in-kind donations, and more than 42,000 hours. SaskTel employees raised over $165,000 through SaskTel TelCare and along with SaskTel’s commitment to match 50% of each donation, the total reached nearly $248,000.

SaskTel works with many external suppliers to provide products and services needed to operate its business and 73% of SaskTel suppliers were located in Saskatchewan, providing economic opportunities to small and medium-sized businesses.