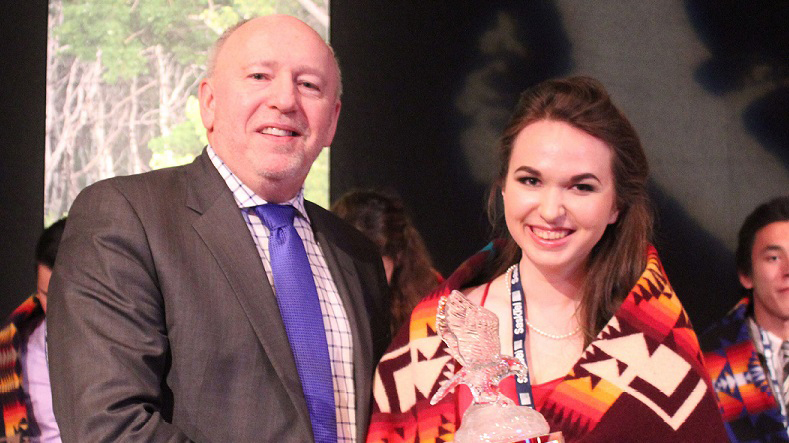 In her first time attending the SaskTel Indigenous Youth Awards of Excellence, Sidney Ray Shacter, had much to be happy about as she took to the stage and accepted her well-deserved Outstanding Achievement Award.

“It didn’t feel real at first, then I was so excited,” said Sidney. “I was so honoured to receive a Pendleton Blanket … Being one of the youth on stage during the final song that honoured us is a memory that I will always cherish.”

Sidney has every right to be proud of her accomplishment, with over 100 nominees vying for awards in just 10 categories, there was strong competition on hand. But one of the most striking things about Sidney, is her humbleness and obvious concern for others that played a large part in making her a stand-out nominee for the award.

When asked what she liked best about the awards night, she answered that it was the fact that all the nominees are honoured during the awards ceremony, not just those who received the awards. “[It] creates a feeling of community among the applicants, and give more youth the opportunity to be honoured and celebrated,” said Sidney. “Being part of the Grand Entry was so powerful, and being a nominated youth was such an honour. Sitting in the audience and listening to all of the bios of the nominees was amazing, I felt so fortunate to be among these students.”

Those close to her likely wouldn’t find Sidney’s answer all that surprising because of her tendency to take on a leadership role wherever she goes and her focus on helping others. One of the best examples of this comes from her time in Media School. After her first semester at the school, Sidney volunteered to return as a Teacher’s Assistant, she also established a math and science club for young home schooled girls and both founded and produced an online magazine for home schooled youth.

Sidney’s most recent project at the school was organizing a two day workshop for Grade 11 Media School students where she met with students to help them learn about reconciliation. The young students created their own short films based on the Truth and Reconciliation Commission’s Calls to Action that were then shown as part of a mini film festival, along side the National Film Board’s Birth of a Family at the Unitarian Centre in Saskatoon on June 13.

Media School has helped install a love of film in Sidney. “I would also like to attend film school at some point, as this is my passion, and I hope to eventually own and operate a film company,” said Sidney. But even though Sidney has a great love for film, her immediate goal for the next stage in her life is to obtain degrees in Computer Science and Business at the University of Saskatchewan.

While Sidney is well on her way to achieving her goals, she does have some advice for other young people who are looking to find the same kind of success that she’s had. “Find something you enjoy doing and work hard at it,” said Sidney. “Try to find ways to bring this thing that you enjoy into other areas of your life … Seek out and pursue whatever opportunities are around you, and try to remain true to yourself.” But the most important piece of advice Sidney can offer is to “prioritize your health, happiness, and goals while being a good, kind and caring person above all else.”

Nominations for the 20th Annual SaskTel Indigenous Youth Awards of Excellence will open in Fall of 2017.