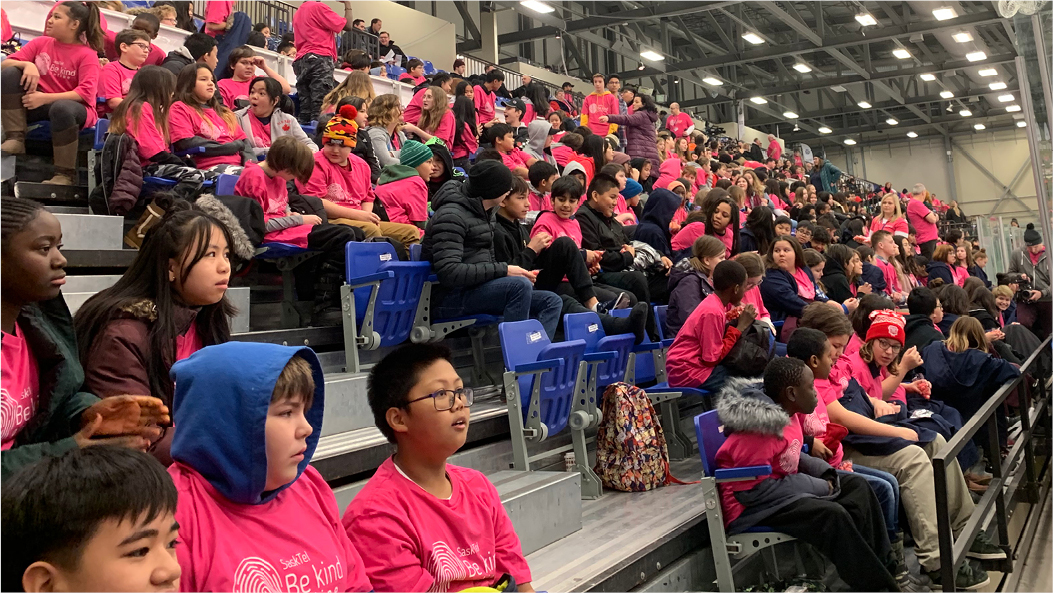 It was excitement mixed with a healthy dose of on ice mayhem when SaskTel Be Kind Online and the SJHL joined forces to host 600 students for the SJHL-MJHL Showcase Pink and White Game at the Co-operator’s Centre January 22, in Regina!

Held on day two of the junior hockey showcase, the Pink and White game featured top talents from across the SJHL and MJHL as they looked to show their stuff in front of a hyped-up crowd and professional hockey scouts from the college level right on up to the NHL.

While the players on the ice were doing their best to impress throughout the competition, setting this game apart was the brilliant pink and white jerseys donned by the SJHL and MJHL teams. Even dignitaries like the Honourable Gene Makowsky, got into the spirit by wearing his own pink and white game jersey for the ceremonial puck drop

The game was an exciting back and forth affair with the MJHL team eventually triumphing 4-3 over their SJHL hosts, but the most amazing part was how much the players and students seemed to embrace the message behind Be Kind Online!

“We can all recognize that bullying is a problem youth today are facing and that it can get even worse when it goes online,” said Jennifer McCleod, SaskTel HR Manager responsible for Be Kind Online. “With Be Kind Online we want to prevent bullying before it even starts by helping kids understand that together we can make a kinder world.”

It was the same message that attracted the SJHL to expanding their partnership with SaskTel to include Be Kind Online in the showcase event. For the SJHL, athletics is about far more than just sport or the opportunities to advance to higher levels of competition, it’s about building character and life skills.

Moreover, given the more personal nature of a league whose players are so accessible to their younger peers in the community and you have an opportunity for many of these players to lead the way on creating a kinder and more respectful world.

“These young people are all right in the middle of it and almost all of them are on social media of some kind,” said Bill Chow, President of the SJHL. “We know that in their home and adopted communities they are often looked up to by other young athletes who are chasing the same dreams and that provides an opportunity to be a positive force online.”

And that status is something the SJHL is looking to take advantage of by committing to help educate its players around the impacts of bullying and how we can prevent it. To ensure the message wasn’t being lost on players, the SJHL organized a special bullying prevention session for the players participating in the showcase.

While the players participated in their talk in advance, the 600 special guests from in and around Regina were invited to attend the Be Kind Online Rally following the Pink and White Game. At the rally, the students were treated to lunch courtesy of Subway and Sask Milk as well as a snack provided by Capital GM. Following lunch, the kids were able to join in an interactive presentation with guest speaker Cpl. Sean Chiddenton (RCMP).

Cpl. Chiddenton has seen bullying and its effects throughout his career. He credits dealing with the effects of bullies of all ages in his own and others’ lives as one of the main reasons he became a police officer.

“It’s very important for kids to understand we are all different and those differences make us unique,” said Cpl. Chiddenton. “Bullying someone can have long lasting effects on them right into adulthood; ruining a person’s self-confidence. It can also make them mistreat other people.”

This places prevention and awareness as a critical part of breaking the chain. As long-time speaker on the issue, Cpl. Chiddenton has noted that while the issues around bullying still persist, there’s a lot to be positive about.

“What has changed is more and more kids are finding the courage to speak out, or to rise above the comments from others,” said Chiddenton. “More attention is being given to this problem with things like Pink Shirt Day, and now the Pink and White Game and Be Kind Online Rally, kids are standing up for themselves and their friends!”

Although things are moving in the right direction, more still needs to be done. Continued education and awareness are needed to dispel some of the more persistent myths around bullying like the idea that bullies will eventually grow out of the behaviour or its just kids being kids.

It was a message echoed throughout the rally. Kids experiencing bullying don’t have to play the victim. They have rights, and there are people out there who are willing to help if they can be brave enough to reach out.

As host to the Ministry of Education’s Report Bullying SK Student Online Reporting Tool, BeKindOnline.com serves are a one stop location to report incidents of bullying within Saskatchewan Schools, as well as a place to find helpful resources that can assist those experiencing bullying or those trying to support them.