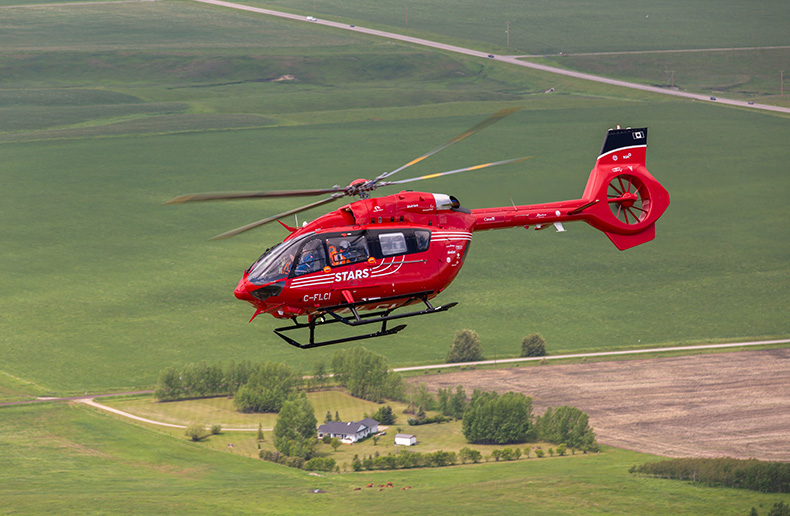 Thanks to a recent renewal of funding from SaskTel, SaskPower, SGI, SaskEnergy and Crown Investment Corporation (CIC), STARS will receive $10 million – $2 million per Crown – over the next five years, enabling continued service for Saskatchewan residents like Lindsay and her family for years to come.

“You never really think it’s going to be your loved one that needs STARS, but we are so incredibly thankful that the air ambulance was able to reach my dad when he needed it most,” said Lindsay.

On September 6, 2022, Lindsay’s father Keith was doing some work on the family cabin currently under construction at Kenosee Lake.

Suddenly his tractor rolled, and he was ejected about eight feet down into the unfinished basement.

Keith fell onto rebar which impaled his left side leaving him with numerous injuries requiring urgent care.

“It was less than a 30-minute transport by STARS to Regina General Hospital, whereas by ground ambulance it would have been over two hours,” said Lindsay. “STARS was able to quickly get him care and into the emergency room so they could diagnose and treat his injuries in a timely manner. After ten days in the hospital my dad is well on his way to making a full recovery.”

STARS currently has bases in Regina and Saskatoon operating 24 hours per day, seven days a week. Since 2012, the service has carried out more than 9,200 missions to more than 500 locations across the province.

“When seconds count STARS is honoured to give those in need a second chance. We are proud to have become an integral part of Saskatchewan’s health care system in the last ten years, working alongside our local partners in the chain of survival,” said STARS president and CEO Andrea Robertson. “The ongoing funding from our provincial government along with the incredible support of our Crown corporations is the very lifeblood behind our life-saving operations.”

“At SaskTel, we are firmly committed to supporting the people of our province, especially the rural population,” said Jodine Smith, Communications Manager. “STARS is a vital lifesaving service in Saskatchewan, and we are proud to help fund its continued operations.”

Since SaskTel began supporting STARS in 2012, it has provided $6 million to the charitable cause.