Leading by example is par for the course for Brayden Storm

Leading by example is par for the course for Brayden Storm 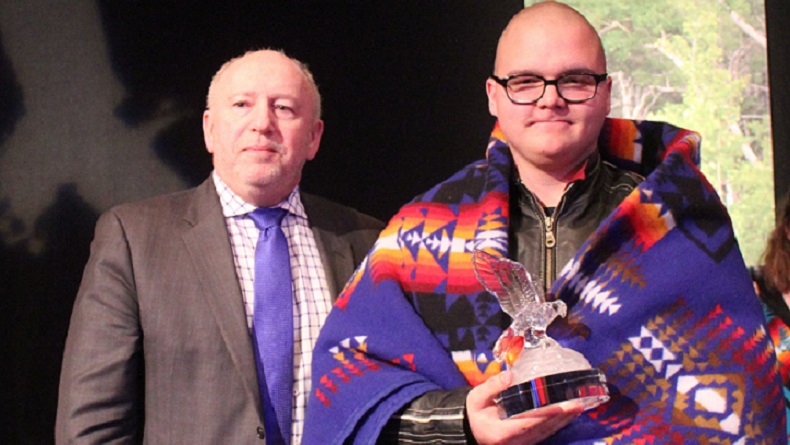 Brayden Storm is a young man who is defined by his willingness to help almost anyone who asks, and a work ethic that few others can match. Given these traits, it wasn’t at all surprising that he took home an Outstanding Achievement Award at the 2017 SaskTel Indigenous Youth Achievement Awards of Excellence.

This wasn’t Brayden’s first time being nominated for one of these awards. In 2015, Brayden was up for the Community Service Award. He didn’t win that year, but that didn’t discourage him from trying again in 2017.

With close to 100 nominees across 10 award categories, “I honestly wasn’t expecting anything,” said Brayden. “But I won … it was really really nice.”

Brayden, a Saskatoon high school senior who lives on a farm near Radisson, was diagnosed with High Functioning Autism 2 years ago. But, just as it’s a part of who he is, it doesn’t define him. “It’s important for everyone to know that even with this diagnosis people can achieve whatever they strive for,” said Brayden.

Displaying wisdom that seems far beyond his years, speaking with Brayden, makes its clear that his maturity is driven as much by his personality as his personal philosophy.

“People should always try their best to do something even if they don’t like it. Even if they’re tired, they need to push through. In the end, it will make them stronger,” said Brayden. “Their hard work will always pay off.”

Brayden certainly walks the talk and is a living example that hard work pays dividends down the road. When his high school’s wrestling coach asked Brayden to fill in on his roster after losing a team member, Brayden agreed to join the team. While Brayden isn’t the biggest fan of the sport, because he committed himself to being on the team, he made sure to give it his full effort and ended the 2015/16 season as City and Provincial Champion in the 130kg division.

He has the same attitude when it comes to volunteering. “I try to help out and get involved whenever I can,” said Brayden. “I try to lead by example rather than with words. Generally, people seem to like what I do so it seems to be working.”

This philosophy has led Brayden to be a committed volunteer. He is well known for volunteering around Radisson doing activities such as helping at the local rink, participating in the annual town clean up, or even filling and placing sand bags during the 2013 floods. He is also very active at his high school, volunteering to help staff various events and tournaments, and as an equipment manager for the football team.

Despite not always having his heart tied to every cause, Brayden still sees the value in helping others. This is one of the key reasons Brayden’s goal in life is to become an RCMP officer, although Brayden admits that the promise of deployments that can take him all over Canada and especially the north holds their own added appeal.

With financial awards and scholarships already in hand, Brayden will be entering Saskatchewan Polytechnic’s Aboriginal Policing Preparation course in the fall. Once completed, Brayden is planning to apply for the RCMP’s Cadet Training Program as soon as he can.

For those interested in following in the tradition of this year’s award winners, nominations for the 20th Annual SaskTel Indigenous Youth Awards of Excellence will open in Fall of 2017.

If you would like to read more about the other 2017 Outstanding Achievement Award winner, Sidney Ray Shacter, please see our previous article posted here.