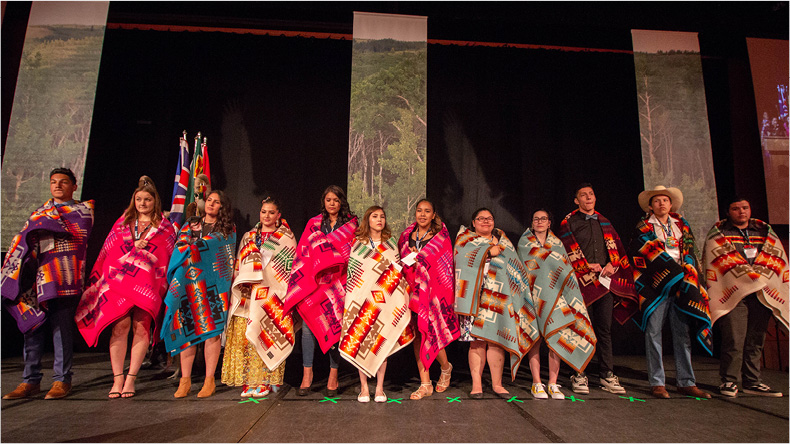 It was a night of celebration and positivity, with strong doses of inspiration, as the winners of the 20th Annual SaskTel Indigenous Youth Awards of Excellence (SIYAE) were announced on May 25, 2018. Over 850 people were in attendance for the gala event which recognized achievements in 11 categories including Outstanding Achievement, Leadership, Community Service, and Innovation.

Over the course of the evening, an excited audience that included the nominees and their families were treated to engaging cultural entertainment, including energetic performances by the Buffalo Boy dance troupe, Strong Sisters, and Métis fiddlers Dallas and Phil Boyer. Darian Lonechild, this year’s keynote speaker and past SIYAE winner, also took to the stage to the stage to share her story on the importance of finding your own path to fulfillment and success.

The gala event, which was held at TCU Place in Saskatoon, began with a Grand Entry that included FSIN Vice Chief Edward (Dutch) Lerat, Indigenous Elders, and other important guests.

For Ronin Iron, a Saskatoon high school senior and this year’s winner of the Outstanding Achievement award (Male), it was a night he will always remember.

“I have never been nominated for such a prestigious award before,” Ronin said. “It was an honor to receive the award and to be presented with a ceremonial gift.”

That ceremonial gift – a Pendleton blanket – is a symbol of spiritual blessing and commemoration that was given to each of the SIYAE award recipients.

A member of the Canoe Lake Cree Nation, the Grade 12 student has built an impressive history of academic achievement and giving back to his school and community through volunteerism. He also strives to stay true to his cultural beliefs and abstains from drugs and alcohol so that he can be a good role model to others – especially his younger brother.

His strong work ethic and good attitude is something that translates well to his athletic pursuits. On the court, he was Bedford’s Senior Badminton MVP and part of the city’s champion basketball team. Earlier this year, he also participated in the Tony Cote Winter Games.

The Bedford Road Collegiate student also spoke about how the awards send a positive message to Indigenous youth that they can put into motion the actions needed to achieve their goals. With a strong passion for math and problem solving, he intends to begin studies at the College of Engineering at the University of Saskatchewan this fall.

“My message to others would be to push yourself to fulfill your goals. There are always going to be obstacles in life to overcome but believing in yourself and surrounding yourself with family and friends that support you – that’s the key to success.”

Jewel Charles, a young artist and member of the Lac La Ronge Indian Band, is the winner of the Fine Arts/Performing Award. The Grade 10 student is already making waves in the arts community and is emerging a strong advocate for arts education in the province. Her abstract paintings draw inspiration from her First Nations heritage and have been commissioned by the Saskatoon Police Service, Saskatchewan Polytechnic and FSIN, just to mention a few.

She credits her mother, Colleen Charles, for pushing her to develop her skills as an Indigenous artist.

“I felt so proud to receive the award for Fine/Performing Arts because my mom got to see me on stage,” said Jewel. “My mom was the one who really pushed me forward to my passion.”

Jewel plans to attend the Pre-AP Art Program at Evan Hardy Collegiate next year and wants to eventually attend the Fine Arts program at the University of Saskatchewan. Although still young in age, she already demonstrates an infectious love for teaching and encourages others to express themselves through art. Jewel currently teaches art classes for children and newcomers at the University of Saskatchewan and, this summer, she will be travelling to Ottawa where her paintings will be on display at the Da Artisti Studio & Gallery.

For Colleen Cameron, Chair of the SaskTel Indigenous Youth Awards of Excellence, the awards are a great way to recognize and encourage our young people as they continue onward in their own journey towards achievement.

“These awards are so important,” she said. “It’s a wonderful feeling to bring these exceptional young people together to celebrate their successes and honour the integrity they bring to their schools and community.”

Across Saskatchewan, Indigenous youth are making their mark each and every day by realizing goals that have a positive impact on themselves and their community. The SIYAE was established by the Wicihitowin Foundation to help bring attention to these amazing youth that deserve recognition for their contributions to our province.

This year’s edition of the awards attracted over 110 nominations from across the province – each nominee standing strong with unique achievements in their area. Congratulations to all the nominees and 2018 award recipients on a job well done! It’s clear that the future is bright for so many young people in Saskatchewan.

This year’s SIYAE winners are:

About the SaskTel Indigenous Youth Awards of Excellence:

The awards are open to First Nations, Métis and Inuit individuals aged 14 to 18 who have a demonstrated commitment to their community and exemplify the qualities of leadership, perseverance and inner strength.

You can learn more about the kinds of things past SIYAE winners have accomplished in our coverage of the 2017 Outstanding Achievement Award Winners: Brayden Storm and Sidney Ray Shacter.